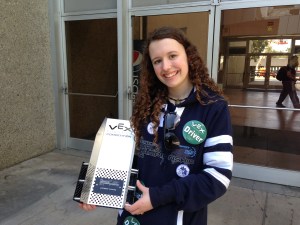 The Vexmen are a group of students, mentors and sponsors who know it’s important to get kids interested in S.T.E.M. (Science, Technology, Engineering and Mathematics) based careers. We are 80+ students from the Downingtown area divided among 17 teams. Using competition robotics we learn valuable life skills such as communications, planning, cooperation and negotiations. We also bring to life S.T.E.M. skills in areas of electronics, mechanics, pneumatics, programming by planning, designing, building (and sometimes rebuilding), testing and driving robots. The Vexmen are one of the largest Vex robotics clubs in the country. We are privately supported and currently do not receive funding from the school district. 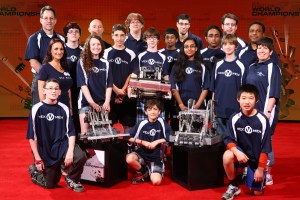 In the VEX Robotics Competition Middle School students ages 10 to 14 compete in a Middle School division of teams while students ages 15 to 18 compete in a High School division. Vex allows students to design, build, program and compete with VEX kit robots against kids their own age. Working in teams of 3 to 6, learning basic construction and programming skills, teamwork and problem solving.

The VEX competitions worldwide include the same game or challenge globally. Here is a link to a promo video on the VEX REC Foundation web site which may help you get a flavor for what this competition is about. The Vexmen provides a great learning experience for future engineers.

In the Vex Competition, Robots may only use parts from the Vex Robotics kit and robots must start within an 18 inch cube in size. The rest is up to the kids to think of how to build the best robot possible. Matches last two minutes and the robots are paired together to compete two on two as alliances. The participants have a lot of fun building and competing, and also learn many life skills, such as presentation skills and how to work as a cohesive team, along the way.

The Vexmen have been competing since 2009-2010 season of Vex robotics. The club has sent teams to the Vex World Championships for four years and have won awards in the past three years including the 2011 Middle School Excellence Award for team 80 – Nightcrawler – which is the highest honor at the competition.

In 2011, the Vexmen won the Team Award recognizing the club, the Excellence Award, and the Think Award to 81 – Gambit – honoring the best programming in middle school.

At the 2012 Vex World Championships, the Vexmen won the Community Award for their efforts in getting robotics integrated into the Downingtown School district. Team 80X – X-23 – won the Amaze Award for their auto-scoring light sensor driven apparatus, and 80N – Nightcrawler – won the Spirit Award for their gameplay.

In 2013 Vex World Championships, Team 81M – Mystique – won the Judges Award for their understanding and demonstrated learning of PID in their Engineering Notebook, proper tuning and implementation on their robot.

In 2014 Vex World Championships, Team 90C – Cyclops – won the Think Award for their excellence in autonomous programming skills. The 90C middle-school team competed against Middle School, High School, and College students to earn the overall 13th place in the world!